info@TheKnightsTemplar.org
HomeTemplar2022-03-02T00:09:58-05:00
Please pray for our Christian Brothers & Sisters in the Middle East as more are being killed everyday for their faith

“From humble beginnings the Knights Templar rose to become the most powerful military monastic order of the medieval world.  Pledged to protect pilgrims during the Crusades, the Templars became heroes to Christians everywhere.  Their fighting prowess was legendary.  The sight of their white cloaks and red crosses inspired the faithful and struck terror into their enemies.  Young men rushed to join the Order, taking vows of poverty, chastity, and obedience to fight for God.  By the thirteenth century the Order commanded thousands of men, ships, and castles in every country in Europe.  Considered untouchable, the Templars owed allegiance to no king-only to the Pope himself.“
– Jordan Mechner in Templar (1) 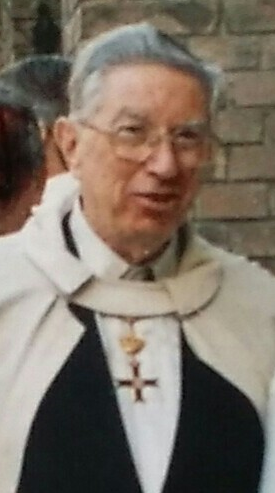 Welcome to the OSMTJ Knights Templar of America (OSMTJ stands for the French, “Ordre Souverain et Militaire du Temple de Jérusalem”).  The Knights Templar are a Christian (Catholic, Protestant, and Orthodox) fraternal and chivalric Order.  We have no Masonic or political affiliations. We are ecumenical meaning we are not affiliated with any single denomination but represent all of Christendom.

We are part of a  world-wide organization for the fellowship and networking of like-minded individuals.  Our Order is organized Internationally under the  “Ordre Souverain et Militaire du Temple de Jérusalem” (OSMTJ,net). Each Grand Priory translates this into their own language. The Regent of our Order is his S.E., Dr. Nicolas Haimovici Hastier.

Our Order vows to hold to the virtues of Honesty, Loyalty, Perseverance, Charity, Humility, Courage, and Honor.  We take our vows seriously and hold each other accountable as our ancient statue proscribes: “Each day we must help our brethren for whom we are responsible, for one day God will say, ‘Where is thy Brother?'”

In contrast to much of today’s society, with people moving from place to place, and from relationship to relationship, this Order calls Knights and Dames to live a committed life of purpose.

Historically, the Knights Templar were a Christian order of warrior monks founded about 895 years ago in 1118 A.D..  Named for the Temple Mount in Jerusalem, the Templars initially protected pilgrims traveling through the Holy Lands, but eventually evolved into a powerful military force that waged war to protect the Holy Land during the Crusades (See “History”).

With the blessings of Grand Master Zdrojewski and Swiss Grand Prior, Alfred Zappelli, Father Philip Guarino founded this United States Grand Priory of the OSMTJ Knights Templar in 1973.  Guarino was an Italian-American former Roman Catholic Priest, who had attended Seminary in Italy.  He moved to Washington D.C. in 1945 and was long time friends of Alfred Zappelli.  Read more about our founder by clicking here.

The reasons for the order are to:

– Spread the light of Christ in an increasingly dark world.  Today’s Templars are faced with a spiritual battle instead of a physical one.

– Act as a force to unify all Christians, Catholic, Protestant and Orthodox, under the banner of Christ.  Today, Christians are under attack by extraordinarily powerful enemies.  “We must all hang together, or assuredly we shall all hang separately.” ― Benjamin Franklin

– Perpetuate the traditions of the Knights Templar by defending Christendom through non-violent means.

– Live a life of Chivalry and hold each other accountable to a lifestyle of excellence.

– Promote historical studies, heraldry, and the genealogy of the Order.

– Promote, through the values ​​of friendship, loyalty and respect, feelings of universal brotherhood and ideals of solidarity between all people.

The 12th century Cistercian Abbot, Bernard of Clairvaux wrote, ”The Knight Templar is truly a fearless knight and secure on every side, for his soul is protected by the armor of faith just as his body is protected by armor of steel. He is thus doubly armed and need fear neither demons nor men. Not that he fears death–no, he desires it. Why should he fear to live or fear to die when for him to live is Christ, and to die is gain?”

One of our primary focuses is raising money and awareness for our chosen charity: helping persecuted Christians. We currently work with an outstanding and trustworthy  N.G.O. called Voice of the Martyrs, which is found at www.Persecution.com.  Voice of the Martyrs  is a nonprofit, interdenominational Christian missions organization dedicated to serving our persecuted family worldwide through practical and spiritual assistance and leading other members of the body of Christ into fellowship with them.

Why not do something extraordinary to make a difference in the world for good?  Being a Knight Templar means being committed to an ancient holy order 895 years old. It is not a remnant of the past, it is a way of life.

The US Priory of the Knights Templar is looking for those upstanding Christians interested in becoming exceptional. Few are chosen and the standards are rigorous, but the reward of Knighthood in this ancient and storied Order awaits you. Do you dare to try? For more information on how to join us, email: info@TheKnightsTemplar.org or click the “Join” tab.